Star Career: Dan Hart has been in the industry for nearly 40 years.

Most schoolchildren dream of space adventures. Few ever experience the thrill of launching their own rocket into orbit. But Dan Hart is one of the lucky ones.

“There is a level of tension that increases as we get closer to launch,” says Virgin Orbit’s chief executive.

“Once a rocket leaves the factory, everyone’s thinking changes. I look around and see people making their game faces,” he says, referring to the heightened sense of anticipation that comes with every event.

Despite a 40-year career spanning some 140 launches, Hart’s boyish attitude to space has not waned. It’s not new to watch rockets launch. His next mission may be the most ambitious yet. Virgin Orbit leaves its home in California for its first overseas launch in sunny Cornwall.

The business, founded by Sir Richard Branson, has teamed up with the British consortium Spaceport Cornwall to launch a satellite into space later this month. This will be the UK’s first orbital launch.

The excitement was growing on both sides of the Atlantic. Hart believes this could speed up the UK’s space race.

Britain already has a growing space sector that employs 47,000 people. It is estimated that the global race for space could be worth $1.25 trillion by 2030—a growth rate of over 6 percent per year from now.

Hart says: “The UK satellite market has been a leader, so there has been huge growth. What is happening now is the formation of an integral ecosystem. Look around Cape Canaveral [in Florida]. All these enterprises support space, build satellites, operate satellites. And I think it could happen in Cornwall.

Newquay Airport will host a mission in which a Virgin Orbit Cosmic Girl aircraft will take off with a rocket that will then be sent into Earth orbit.

Last week, Virgin wrapped up a full launch rehearsal, suggesting the day is near. The mission could be a step forward in the UK’s growing space sector, already valued at £16.4bn.

Hart adds that it could also open the door for Virgin Orbit to open offices in London and Cornwall and potentially manufacture parts of its rockets on English soil.

Like many others, Hart’s fascination with space began on a late summer evening in 1969.

“I was watching grainy TV and saw Neil Armstrong taking his first steps on the moon. It was hard for an eight year old to understand, but it seemed to me something important, something with real potential. It determined my path.

The son of an oil painter, Hart grew up in New York City and earned a degree in physics from the local University of Albany.

He was hooked on a career in space when he participated in his first launch with Boeing’s space division at the age of just 22. “After that, you’re completely caught.” This was followed by 30 years in an aerospace company before his career took a turn when Branson called him five years ago.

He took over Virgin Orbit in 2017 and has since taken the company from California dreamers to an established space service. At the moment, its expenses have exceeded a billion pounds, and its workforce has increased from 200 to 650 people.

Hart admits there were doubts about the firm’s capabilities and a “necessary mistrust” of his team’s enthusiasm.

But so far, Virgin Orbit has completed several launches under his direction and has clients including the Sultanate of Oman and the US Department of Defense. 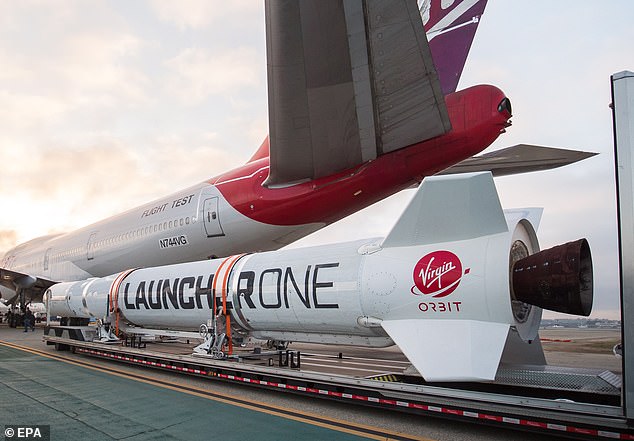 “We launched 33 satellites into space in four launches in 18 months,” says Hart proudly. “I don’t think anyone has ever done something like this at this pace and with this level of success.” With a £10m launch fee, it’s easy to see why he’s eyeing hundreds more by 2025.

Virgin Orbit has only one modified 747 in its fleet, the Cosmic Girl. But Hart claims he can launch as many missiles as his team can build. He said: “Now we are focusing on making rocket launches a standard operating activity.

“We have anywhere from one to two dozen clients. I think in a year and a half this number will increase five times.”

However, Hart and Branson’s ambitions are not limited to 500 km in low Earth orbit. Next on their list are interplanetary missions that could launch satellites around Mars or Mercury. Virgin Orbit has already signed a contract with NASA.

So could the Moon, which has fascinated him since childhood, be next on his wish list? “We may be there in a couple of years, so not far off,” he said. “It would be perfect symmetry, because that’s how it all started in my mind.”

Kroger’s stock is a solid bet, with or without the Albertsons’ deal, Bernstein says

On The Beach founder Simon Cooper to quit

On The Beach shares slip after founder reveals exit plan