Longtime emerging markets fund manager Carlos Hardenberg says he is facing strong headwinds. But he passionately believes that the opportunity for long-term shareholder returns is just around the corner. “I have to be an optimist,” he said last week as he traveled through the Middle East, meeting business representatives in Turkey, Dubai and Abu Dhabi.

Hardenberg is the driving force behind Mobius Investment Fund, a £131 million listed fund that invests in a concentrated number of companies with large business interests in emerging markets. Despite a difficult past year, since launching in October 2018, the trust has performed satisfactorily, delivering a return of just over 20%.

Headwinds are familiar – raging inflation and a global economy teetering on the brink of recession. The strong dollar also made investors hunt for US assets, which led to a large outflow of capital from emerging markets.

“We are going through a period of heightened fear fueled by the war in Ukraine.

“Investor confidence in emerging markets is low and it looks like a complete bear market.” But, fortunately, the fund manager is encouraged by what he hears from the company’s bosses. “While Turkey is suffering from inflation in excess of 80 percent and its economy is in poor shape,” he says, “the same cannot be said for countries like India and Vietnam. They are in a good position to capitalize on the shift of world production from China.”

“I believe that in the next four years we will see a massive repricing of the 24 investments we own,” says Hardenberg confidently. “In addition, our focus on high-tech semiconductor companies will pay off.” Taiwanese companies make up almost a quarter of the trust’s portfolio.

Hardenberg refuses to own companies registered in Russia or Argentina. He also reduced the trust’s presence in China by selling positions at medical instrument company AK Medical and restaurant company Yum. 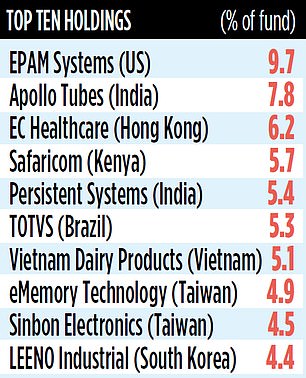 “The long-term economic outlook for China is not as bright as it used to be,” he explains. “Stronger controls by the Chinese authorities have also created a difficult environment.” While Hardenberg is concerned about China’s uneasy relationship with Taiwan, he doesn’t believe a sudden military conflict could occur. “China wants stability,” he says. “She needs her economy to start growing again and attract international capital.”

While Taiwan is the trust’s largest holding in the country, many of the Taiwanese companies it owns have manufacturing facilities around the world. Next month, the trust will allow shareholders to exit at a price that reflects the value of the fund’s assets. But since the value of the shares is close to the value of the assets, Hardenberg is confident that few will take advantage of this offer. Indeed, he believes the trust may be able to issue new shares as other investment fund managers, such as Fundsmith, liquidate their emerging market funds as a result of poor performance.

The trust has no loans, a 10% cash deficit and an annual management cost of 1.55%. Its stock market identification code is BFZ7R98 and its stock ticker is MMIT. It pays a small annual dividend of 0.35p per share in its most recent financial year and its shares trade at £1.23.

Be the bravest Web3 startup: defend your project among VCs

3 Tips for Delivering Your Best Work When You Feel Tired

Fastest growing jobs in construction for 2022