New official data shows retail sales fell more-than-expected last month as restricted shoppers are now buying less than they did before the pandemic.

The number of items bought from UK retailers fell 1.4% between August and September, worse than the 0.5% drop expected by economists.

Households are cutting back on spending as prices rise, according to the Office for National Statistics, but the numbers were also affected by the Queen’s funeral holiday, when many retail stores were closed.

Budgeting: Food sales fell the most last month as food inflation surged to 14.6%

With food inflation rising to a 42-year high of 14.6% last month, shoppers have become more cautious when filling their shopping cart at the supermarket.

Britons also cut furniture sales, with sales at home improvement stores down 1.5% and clothing sales up 0.1%, driven by growth in shoe stores.

“Continuous feedback from retailers suggests that consumers are cutting back on spending due to price increases and availability issues,” ONS explained.

Even online sales fell 3%. However, they still account for more than a quarter of all retail spending and are 18% higher than before the pandemic.

Overall retail sales are now 1.3% lower than pre-pandemic levels, raising concerns that the UK economy is heading into recession by the end of the year.

Consumers are tightening their belts as inflation hit 10.1% and braces for a tough 2023 with electricity bills set to rise even more.

Chancellor Jeremy Hunt has announced that the energy price guarantee, which keeps the price ceiling at £2,500 for the average household, will end in April, not two years.

High inflation and political chaos, as well as the resignation of Prime Minister Liz Truss after just 45 days in office, are weighing on consumer confidence, which, according to separate GfK data, is hovering near a 50-year low. 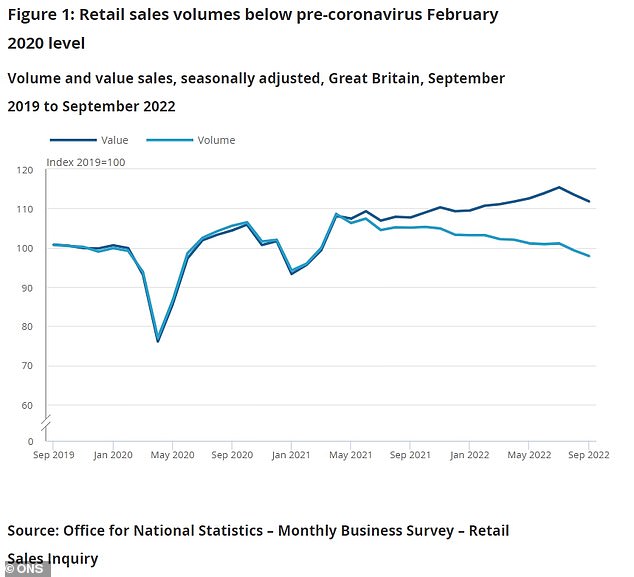 September was the first post-lockdown month in which retail sales fell below pre-pandemic levels.

Several retailers, including Tesco, Next and Asos, lowered their earnings expectations and warned of falling sales amid rising costs and shrinking shoppers.

ONS director of economic statistics Darren Morgan said: “September retail sales continued to fall after a weak August and consumers are now buying less than before the pandemic.

“The fall was seen in all major retail areas, with the drop in sales in grocery stores making the biggest contribution.

“Retailers told us that the fall in September was due in part to many stores being closed for the Queen’s funeral, as well as continued price pressure for consumers to be cautious about spending.”

Lisa Hooker of PwC said: “Even with the extra days off, there is no doubt that momentum is waning as retailers enter the critical period of the Golden Quarter leading up to Christmas.

“Political and economic uncertainty, combined with rising utility bills and the threat of rising mortgage interest rates, will severely dampen consumer spending in the coming months.”

He added: “It is worrisome that September was the first post-lockdown month in which retail sales fell below pre-pandemic levels, suggesting that pent-up consumer demand post-pandemic may have eased completely.”

Alice Hein, personal finance analyst at Bestinvest, said the latest retail sales data is another sign that the UK is slipping into recession.

“With prices rising faster than wages, the prospect of a third prime minister in less than four months […]with more industrial wage strikes in the pipeline, and now tax hikes and spending cuts, the economic landscape looks increasingly bleak.

“More challenges lie ahead for both consumers and the retail sector as borrowing costs will rise again when the Bank of England raises interest rates early next month.”

how to change admin name on mac

What is passive income?

Should You Move to a 55+ Community? – NerdWallet