Lidl plans to overtake Morrisons to become the fifth largest grocery store in the UK, with an additional 770,000 weekly shoppers flocking through its doors.

Ryan McDonnell, head of the German discounter, said his firm has “momentum” to outperform its more established competitor.

But he added that there was still “a lot of work to be done.”

The comments come after Lidl said it has spent £58m in the past month alone at traditional grocers, Tesco, Sainsbury’s, Asda and Morrisons.

It’s drawing hordes of budget-conscious shoppers looking to cut their grocery bills amid the rising cost of living.

And yesterday it doubled down, promising to be the cheapest supermarket this Christmas: a dinner for seven cost £23.

Lidl and its competitor, German discounter Aldi, have been the UK’s fastest growing grocers for many years, having opened nearly 1,000 stores each since their introduction in the UK in the 1990s.

This trend has accelerated due to the soaring cost of living, with the pair’s annual sales growth of around 20 percent.

Asked if he expected Lidl to overtake Morrison next, McDonnell replied: “I think so, yes.”

He told the Mail: “We have a very good plan for our expansion. I don’t calculate at what point I’m going to overtake, but there is certainly a lot of potential for us to maintain market share and get more profit from the switch.” 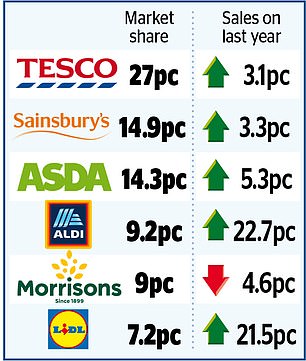 Seasoned retail analyst Richard Hyman said the question now is “when”, not whether Lidl Morrisons will outperform. He said: “Lidl will be attracting buyers faster than it has been for some time because people will continue to haggle at discounted prices.”

Hyman said he could overtake the Morrisons in as little as 18 months.

This came despite market sales falling as shoppers returned to eating out after the pandemic eased. Profits for the year more than quadrupled to £41.1 million.

Its sales have risen since the end of the fiscal year, and a growing cost-of-living crisis is prompting shoppers to switch to discounters.

McDonnell said: “As the cost-of-living crisis deepens, we are more focused than ever on supporting our colleagues, our clients and the communities we serve.

“As a discount supermarket, we are in the best position to support people during these difficult times and it is our absolute priority that we continue to do so.”