The Fundsmith Emerging Equities Trust is due to be liquidated because the results were lower than expected, says the chief executive of its management team, Terry Smith.

The trust has always been tiny compared to the £23.5bn giant Fundsmith Equity Fund, but the decision to liquidate it by the end of November took investment experts by surprise.

Shares jumped 10% this morning, narrowing the discount to the trust’s net asset value as the value of its assets is known. FEET traded at a 15% discount to NAV last night, according to the AIC.

Voluntary liquidation: Fundsmith chief Terry Smith says it’s in the best interest of emerging markets trust shareholders to get their investment back in cash

Terry Smith, chief executive of Fundsmith LLP, says: “We have always maintained that we will only manage funds where we believe we have a particular advantage that will allow us to deliver superior risk-adjusted returns.

“While the Fundsmith Emerging Equities Trust has shown positive returns since its launch in 2014, it has come short of our expectations and, unlike other fund managers who might try to keep the fund alive for fee income, we believe that it will be within the best interests of the shareholders to recover their investment in cash through the liquidation of the portfolio and liquidation of the company.”

The board will seek approval at a general meeting and recommend that shareholders vote on the decision.

He will vote to liquidate his 0.43% stake and adds that he has received instructions from Fundsmith that the partners and employees of the firm, who own 5.25% of the shares, will do the same.

Martin Bralsford, Chairman of the Board, says: “We would like to thank Terry and his team for the hard work they have put in over the past eight years as an investment manager.

“We believe it is in the best interest of shareholders as a whole to liquidate the portfolio and return their cash to them.”

Emerging markets have been hurt as rising US interest rates are sucking money out of riskier investments and recession fears are making investors nervous.

The bulk of the trust’s investments were directed to the consumer protection sector, with the largest holdings including China’s Foshan Haitian Flavoring and Food, Asian Paints and Nestle India. 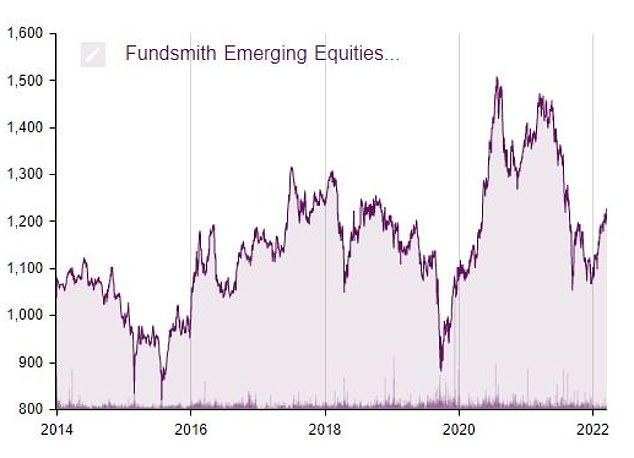 The share price peaked around 1,500 pence, but it fluctuated last year.

Jason Hollands, Managing Director of Bestinvest, says: “It was very unexpected this morning to see the announcement from the Board of Directors of the Fundsmith Emerging Equities Trust that Terry Smith’s team has given notice of intent to terminate the investment management agreement.

“It is difficult to recall a previous example, especially in recent history, when a fund manager decided to retire from portfolio management, earning a commission on this.

“By and large, however, managing a £319m portfolio looks like a distraction for a firm whose flagship product, Fundsmith Equity, a £23.5bn developed-markets fund.

But Hollands noted that while the board has said it intends to seek voluntary liquidation, it may be approached by other asset managers seeking to be managers or investment funds wishing to explore a merger.

Russ Mould, chief investment officer at AJ Bell, says: Terry Smith is arguably one of the most well-known fund managers in the country thanks to the success of his Fundsmith Equity Fund, which has returned 487% since its inception in November 2010, up from 270% from MSCI world. index, a key benchmark for global stocks.

“However, not everything he touches turns to gold. The Fundsmith Emerging Equities Trust has long been the black sheep of the Fundsmith family, unable to deliver the returns that the asset manager’s flagship product enjoys.

“Now it is time to bring the trust to the end with a proposal for its liquidation.

“Affectionately known as ‘FEET’, the trust has invested quite a few subsidiaries in the emerging markets of well-known Western companies, including Unilever and Nestle.”

Mold says the trust has followed the same investment process as its sister fund, but unfortunately, results have been sluggish.

“It’s probably better to leave this experience in history and not let the credibility tarnish Fundsmith’s reputation as an asset manager than to let it limp in the hope that everything will turn out well in the end.”

Burberry’s creative director leaving in shake-up at the top